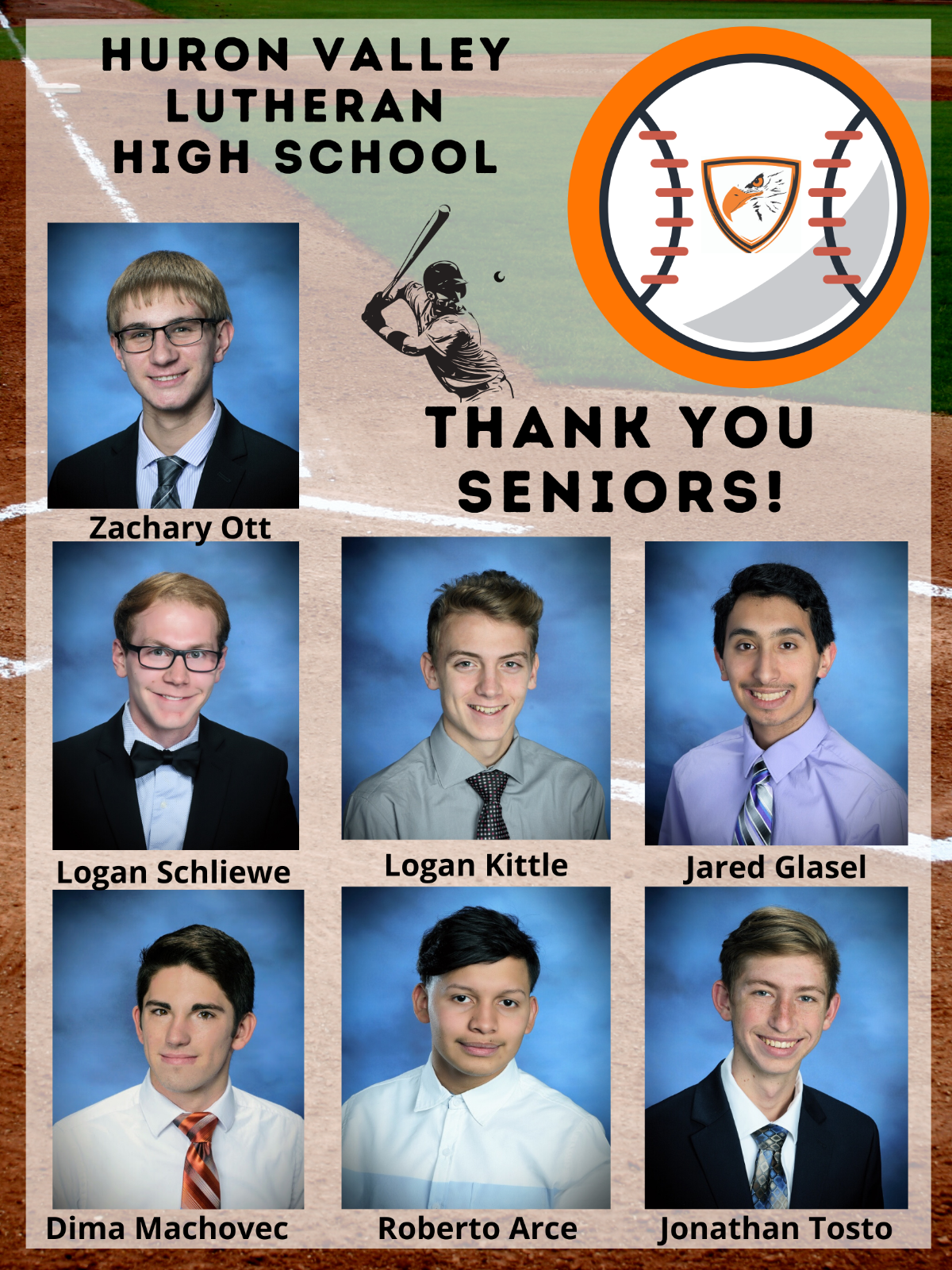 The senior class has left an indelible mark on the HVL baseball program during their 4 years at the school. One of those achievements was last year’s first district win in the last decade. Our entire HVL family will miss these great young men, but the baseball program will be forever grateful for their accomplishments and leadership. A note about each…

Roberto – He joined us as a junior never playing baseball before and displayed a natural ability for the mound as he would have been our #3 starter and a regular player in the infield. His willingness to learn and put in the extra work on his own led to his quick learning of the game. Good luck in your future as you begin your study of your trade.

Jared – He was a 4 year player (last 3 as a starter in the infield and / or the outfield). Jared’s unique ability to draw walks with his challenging strike zone put him on base in some of our most important situations. His drive to succeed allowed him to get the absolute most out of his athletic ability. Good luck as you go to Liberty in the fall.

Logan K – He was a four year starter and all-conference performer as a centerfielder the last 3 years. Logan’s speed in the outfield and his base stealing prowess was an integral part to our success. As a team leader and captain this spring, Logan encouraged his teammates to be better players, while at the same time leading by example. Good luck at Concordia next fall as you begin your college career.

Dima – He was a four year starter and an all-conference and all-district performer as a catcher. His batting career had some huge highs and a few downturns, but his excellence behind the plate will be hard to replace. As a team leader and captain this spring, Dima was willing to put in the work necessary to be a top-notch catcher in our area, and that work ethic will guide him in all his future endeavors. Good luck as you begin your studies at Eastern Michigan in the fall.

Zac – He was a four year starter and multiple time all-conference and all district performer as a hitter and a pitcher. Zac was our ace the last two years and our leading hitter the last two as well. Zac had a ton of natural athletic ability, but he also was willing to put the work in to become even better. That work ethic will lead him to great things. As a team leader, captain, and former MVP of our team the last two years, Zac will be sorely missed in our program. Good luck at Wayne State next fall.

Logan S – He was a member of our team for 3 of his 4 years in high school, playing full time as a freshman. Logan was a quality pitcher and infielder who was going to be a regular on the mound for us this spring as a starter. As a potential state qualifier in the high jump this spring, we had to share him with his love of track. Nevertheless, he would have succeeded in both due to his natural athletic ability. Good luck to you as you begin your studies at UM-Dearborn in the fall.

Jonathan – He was a 3 year starter (came his soph. season) and all-conference and all district performer as a hitter and infielder. His natural hitting style made him a staple in the middle of our order as a major run producer. His long arms and legs also made him a tough relief pitcher in the later innings. With his love of golf, we had to share him in the spring with the golf team. Nevertheless, he led our team in RBI’s last season even after suffering a foot injury early in the season. Your positive nature and your hitting ability in the middle of our lineup will be missed! Good luck as you begin to study your trade in the fall.